Viber originally was designed as a free messenger for smart phones, then there was developed a version for tablets and now it is available for PC. Nowadays everybody can download Viber to its computer and communication will immediately become easier and better! 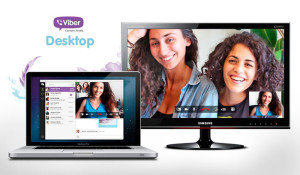 Like smart phone version, Viber for personal computer has a lot of functions and will allow you not to lose connection with your friends.

Era of paid messages has gone

Today the Era of paid messages has gone. Everybody wants to communicate and send files for free. And Viber it is the best solution for it. Here you will find not only free messages, but also the opportunity to share videos, images, music and other content in real-time.

It is really easy - you need just download Viber and install it. Specialized intuitive interface makes you feel comfortable with the program, even for new users, who had no previous experience of using Viber.

Many of you use the well known analogue of Viber for free video communication. But still it is only the analogue. Using Viber you also can make calls free of charge to the relatives, friends and acquaintances who have also installed Viber. The quality of the calls is really good and a lot of people in the whole world have already tested it.

Of course you should not worry about the synchronization of your contacts and correspondence - every chat, which you had when using smart phone or tablet will be displayed on your personal computer. It was made for a more comfortable use of the program.

Also it should be noted, that the quality of app and each detail separately is very high: sound, quality and variety of animated smiles make user feel comfortable and satisfied. Of course it is not surprise when developers try to make their product better and more adaptive. The same with developers of Viber. They submitted a version which is adapted for work with Windows, and are compatible with the operating system such as Mac OS, as well as enhanced versions for mobile platforms such as Windows Phone, iOS and Android.

Today Viber is tested and loved by the huge number of users around the world what speaks for itself. Each application has its advantage over the others. Talking about Viber they are:

The main features of Viber on your computer (PC):

Viber is in priority among users. Even the most popular analogue of Viber does not support voice calls.

About Viber in digits:

In August 2013 the service enjoyed over 200 million people, located in 193 countries. In February 2014 Viber was installed by 330 million of users. Today, Viber is multilingual and available in 28 languages, including Russian, Vietnamese, Chinese, Korean, Tagalog, Hindi, and so on.